A few months ago I gave a talk at the local Python meetup on how attribute lookup on an object works in Python. It is not as straightforward as it looks like on the surface, and thought that it might be an interesting topic to present.

I received highly positive feedback from the listeners, confirming that they learned something new and potentially valuable. I used a Jupyter Notebook for the presentation, and if you prefer running the code examples to reading, you can jump straight into it – just download the notebook and play around with it. It contains quite a few comments, thus the examples should hopefully be self-explanatory.

Storing attributes on an object

Say we have the following instance:

We can inspect its attributes by peeking into the instances __dict__, which is currently empty, because the x from above belong to the instance’s class:

Nevertheless, an attempt to retrieve x from the instance succeeds, because Python finds it in the instance’s class. The lookup is dynamic and a change to a class attribute is also reflected on the instance:

No surprises here, the x is looked up on the instance first and found there. If we now remove the x, it will be picked from the class again:

Descriptors are special objects that can alter the interaction with attributes. For an object to be a descriptor, it needs to define at least one of the following special methods: __get__(), __set__(), or __delete__().

The class DescriptorX conforms to the given definition, and we can instantiate it to turn the attribute x into a descriptor:

Accessing a descriptor does not simply return it as it is the case with non-descriptor attributes, but instead invokes its __get__() method and return the result.

Even though the result is actually the descriptor itself, the extra line printed to output tells us that its __get__() method was indeed invoked, returning the descriptor.

The __get__() method receives two arguments – the instance on which an attribute was looked up (can be None if accessing an attribute on a class), and the “owner” class, i.e. the class containing the descriptor instance.

Let’s see what happens if we access a descriptor on an instance of a class, and that instance also contains an attribute with the same name:

The result might surprise you – the descriptor (defined on the class) took precedence over the instance attribute!

The story does not end here, however – sometimes a descriptor does not take precedence:

It turns out there are actually two kinds of descriptors:

If descriptor behavior seems similar to a property to you, it is because properties are actually implemented as descriptors behind the scenes. The same goes for class methods, ORM attributes on data models, and several other constructs.

Sometimes an attribute does not exist on a class/instance, but Python does not give up just yet. It continues searching the parent classes, as the attribute might be found there.

Or in a picture, because a picture is worth a thousand words: 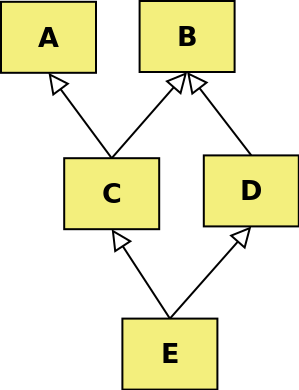 The attribute x is defined both on the class D and class B. If accessing it on an instance of E that does not have it, the lookup still succeeds:

The actual lookup order can be seen by inspecting the method resolution order (MRO) of a class:

Python uses the C3 linearization algorithm to construct it and to decide how to traverse the class hierarchy.

Interlude – what is a metaclass?
Putting it simply, a metaclass is a “thing” that can create a new class in the same way a class can be used to create new objects, i.e. instances of itself:

On the other hand, if an attribute is not found on the class, it s looked up on its metaclass:

There is a caveat, however – a metaclass is not considered when accessing an attribute on a class instance:

The lookup only goes one layer up. It inspects the class of an instance, or a metaclass of a class, but not an “indirect metaclass”1 of a class instance.

What happens if an attribute is not found?

Python does not give up just yet. If implemented, it uses the __getattr__() hook on the class as a fallback.

Because of the fallback, the AttributeError was not raised. Just keep in mind that defining __getattr__() on an instance instead of on a class will not work:

__getattr__() should not be confused with __getattribute__(). The former is a fallback for missing attributes as demonstrated above, while the latter is the method that gets invoked on attribute access, i.e. when using the “dot” operator. It implements the lookup algorithm explained in this post, but can be overriden and customized. The default implementation is in C function _PyObject_GenericGetAttrWithDict().

Most of the time, however, it is probably the __getattr__() method that you want to override.

Accessing an attribute on a (new-style) class instance invokes the __getattribute__() method that performs the following:

You might have seen this one before – you wrote a decorator in Python and tried to apply it to a class method (or static method, for that matter), only to see an error.

As the docstring explains, the logged decorator simply prints a message before invoking the decorated function, and it is applied to the get_name() class method of the class Foo. The @wraps decorator makes sure the original function’s metadata is copied to the wrapper function returned by the decorator (docs).

But despite this essentially being a textbook example of a decorator in Python, invoking the get_name() method results in an error (using Python3 below):

If you just want to quickly fix this issue, because it annoys you, here’s the TL;DR fix – just swap the order of the decorators, making sure that the @classmethod decorator is applied last:

On the other hand, if you are curious what is actually happening behind the scenes, please keep reading.

The first thing to note is the output in each example immediately after calling Foo.get_name(). Our decorator prints the object that is about to invoke in the very next line, and in the non-working example that object is actually not a function!

Instead, the thing that our decorator tries to invoke is a “classmethod” object, but the latter is not callable, causing the Python interpreter to complain.

Let’s take a closer look at a stripped-down version of the Foo class:

As it turns out, get_name is an object which is not callable, i.e. we can not say get_name() and expect it to work. By the presence of the __get__ attribute we can also see, that it is a descriptor.

Descriptors are object that behave differently than “normal” attributes. When accessing a descriptor, what happens is that its __get__() method gets called behind the scenes, returning the actual value. The following two expressions are thus equivalent:

__get__() gets called with two parameters – the object instance the attribute belongs to (None here, because accessing the attribute through a class), and the owner class, i.e. the one the descriptor is defined on (Foo in this case)1.

What the classmethod descriptor does is binding the original get_name() function to its class (Foo), and returning a bound method object. When the latter gets called, it invokes get_name(), passing class Foo as the first argument (cls) along with any other arguments the bound method was originally called with.

Armed with this knowledge it is now clear why our logged decorator from the beginning does not always work. It assumes that the object passed to it is directly callable, and does not take the descriptor protocol into account.

Describing how to adjust the logged decorator to work correctly is quite a lengthy topic, and out of scope of this post. If interested, you should definitely read the blog series by Graham Dumpleton, as it addresses many more aspects than just working well with classmethods. Or just use his wrapt library for writing decorators:

I am an experienced software engineer, primarily using Python and JavaScript in my day-to-day work, putting a strong emphasis on writing clean and maintainable code.

I do not own any pets or hair care products.